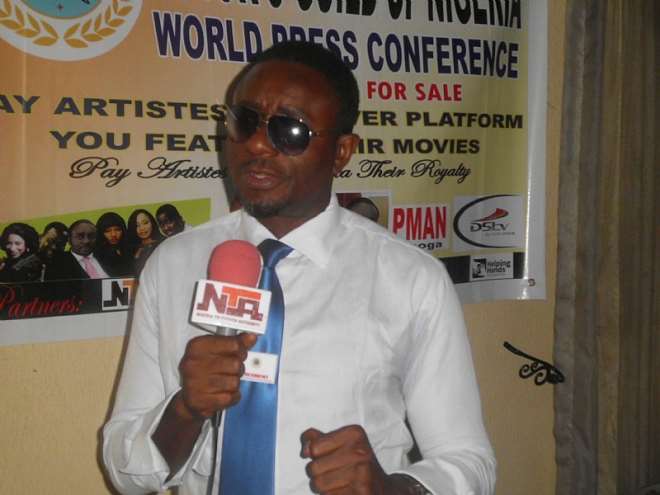 The Embattled President Actors Guild of Nigeria(AGN) and renowned Nollywood Actor,Ambassador Emeka Ike,recently called a press conference in Lagos to address issues affecting the entertainment industry and need for federal government to reconsider the MOPPICON Bill.

According to him, the Minister for Information and Culture, Alhaji Lai Mohammed has not reconsidered the Motion Picture Practitioners Council of Nigeria (MOPPICON) Bill. It is sad that the Nollywood industry has been digitally commercialized to oust our culture by foreign multinational companies. Since the Federal High Court has affirmed our leadership, there is need for the Information and Culture Minister to see us as bonafide members not imposters.

Ike told journalists that 'many Nollywood stars are dying and living in abject poverty. My concern is that every Nollywood actors and actresses must have biometric identity card to access their royalties, health services and pensions from these foreign multinational companies. Foreign film makers have invaded our entertainment industry using female actresses to act nude films with just stipend of #100,000,even sometime rape our female actresses in most hotel rooms without giving them roles to play.

He restated that government commitment to entertainment industry would help to generate revenue for the Nigeria's economy. I am not begging to live but I want the entertainment industry to be redefined and restructured. One thing to be a celebrity and other thing to maintain the status of celebrity. Foreign film makers have succeeded in destroying our talents by using few Nollywood stars to mint money while many living in abject poverty.

He added that our intellectual property has been sold out to foreign multinational companies. It is only Nigeria that Nollywood stars are not given royalty.

Nobody can intimidate me, even though I have lost my huge investment to this cause and hire assassins after my life. The last administration of President Goodluck Jonathan gave out some huge amount of money and allotted acres of land in Abuja but was diverted by some greedy Nollywood leaders to enrich themselves.

Benjamin Praise, one of the active members of Actors Guild of Nigeria and publicist, said, it is a fraud to remove AGN from the MOPPICON Bill project as direct plot sideline the 70% content and fight owners of these industry from being part of the decision making where enforceable issues are brought to base and eventually handed to our transducers who serve as vendors for some particular foreign multinational companies. There is need to overhaul the entertainment industry and nothing more, he said.

Prince Chukwu Roland National Vice President of AGN South East zone, also lent his voice that the government must include AGN in the MOPPICON bill and regulate the activities of foreign multinational companies.

Those present at the conference were PMAN President, Pretty Okafor, Ambassador Obitex Emmanuel, Arc.Victor Edogun and host of others.