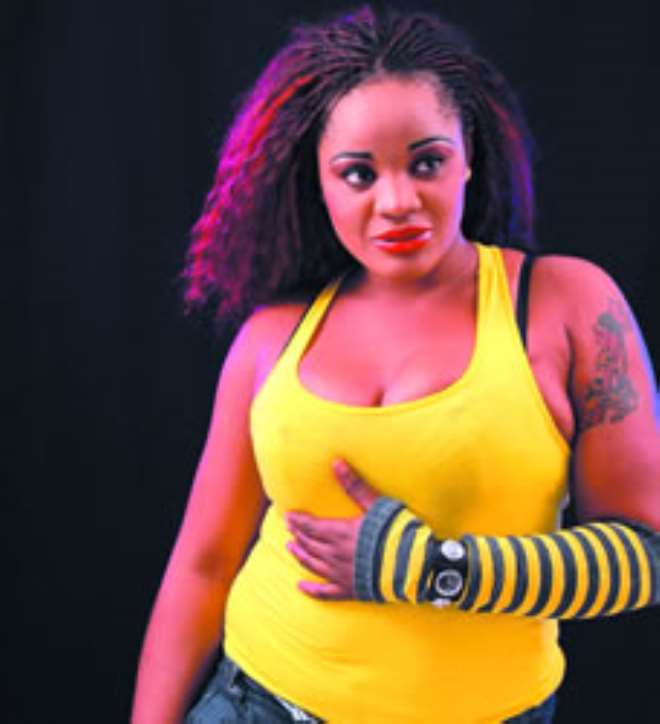 You can't ignore Uche ogbodo for many reasons. One, she is a well-endowed lady while the other reason is the obvious cross and flower tattoo on her arm. She spoke with SAMUEL OLATUNJI on her rising career and what has kept her in the acting world.

Why did your dad introduce you to Nollywood?
Well, I'll say he believed in me. Parents always have the thought that Nollywood is a not a place where you can take your child, especially when you are concerned about the wellbeing of the child. That is a wrong belief about Nollywood. The thing is between the parent and the child; the way parents raise their children also has great impact to do with situations like this. My father saw that I could make it from this part of the industry and he believes strongly in me because he has seen me do it before.

So, how has it been for five years?
It has been fun, and I am grateful to God because some people have been in this same industry for a long period of time, yet there is nothing much to show for it. So I give all the thanks to God. When it all started, I knew I was going to hit-the-peak, but I did not know how it would happen though I have the skill any good actress could possess.

What brought you this far?
It's hard work and God of course. I will also say I had the opportunity, perhaps I came in at the right time when someone like me was really needed, so I just grabbed the opportunity and I made the best use of it.

Does it have anything to do with 'behind closed doors deals' with marketers?
(laugh) Why does everybody think like that? I want to tell you something very important. I have never and I will never sleep with a marketer for a role. For those that sleep with marketers, I will say they are scared of getting good roles because they know they are not good at acting. They believe that if they don't go down with a marketer, they won't get the job. I have never dated marketers for jobs. It has never been a priority for me, that is why I don't give them positive answer.

Does it mean that no marketer has ever approached you?
They are men, you know. Marketers are not aliens and they are not made of steel. Some of them may be attracted to me and they ask me out. I might say yes if I like them and say no if I don't. It happens that I have never seen anyone I like. So the answer has always been a constant no.

What are those things that can result into the rise or fall of an actress?
Hmmm. Commitment to your job and hard work. Try to learn new things every new day. Nobody knows it all. An actress can rise when she wants to learn from the people around her and there must be something that you believe strongly in by your side, it is either God or god. So, the power behind you will determine how far you will go plus your commitment to your job, I think it'd helps. Then what makes them fall is when they think they know it all, they tend to remain stagnant, they don't like to learn new things and it is traceable to every aspect of life. When you are tired of learning new techniques, people will also be tired of you. When people see that all they do is repetition, why would they use you in their movies? So, it's a very simple logic.

Who were the actors that you were on set with?
I was on set with Mama G, Bob Emmanuel, I mean the big stars of then. I didn't have the chance to meet them one-on-one and I didn't have a good role to be precise. I just had one 'Waka Pass' role to play.

How much were you paid for that job?
One thousand naira (laugh)

How did you feel when you were paid that amount?
I felt good. I was like, so I can get this kind of money so easily with just one role to play? I was not actually seeing that kind of money everyday, so I was indeed glad. I always believed it would get better. I was seeing beyond the money they gave to me. I knew it was one of those things everyone has to pass through before they finally arrive.

After the first job, what next?
My second job was a film titled Another Bondage and they paid about N20,000.

Whom did you act alongside with?
Saint Obi and Bob Emmanuel. I was the lead character in that movie and it was a great time-out.

How did you get that job within a year?
I got it because I was good at what I was doing. They saw something good in me; they believed that I could do it. I had to do auditioning for five days to get the job that really set me on fire. There were up to a hundred girls and later the figure was reduced to 50, later 20, ten, five, three and one, I was still standing out. I had all the characteristics that they were looking for.

What are those movies that you did that you can't forget?
I did one with Omotola in the movie titled 'Yankee Girls'. I liked it. I played her friend, the one that she grew up with and it was nice. All through the movie, I was really studying her. It was like a learning field to me because I was playing alongside my role model.

What was it like working with Omotola?
It was nice.

Some people say she is a bitch?
No she is not, she is a strong woman. She knows what she wants and she is working towards it. To me she is a great woman. She is a kind of person I would love to live around with. She is friendly.

What are the other movies you've done?
I have done 'Cut up' with Rita Dominic and Desmond Elliot. I have done 'Woman hunter', Justice by Fire with Ramson Nouah, and many others that I can't even remember.

Who were the memorable actors that you worked with?
I have worked with all the prolific actors and actresses. I don't know how to choose because I enjoy working with everybody.

Who is your role model in Nollywood?
If I have to choose someone from Nigeria, I'll choose Omotola, and hmmm, Angelina.

Why Omotola?
I choose her because I love the way she acts. She is more than good. She is real.
Why do you have a tattoo (with cross and flower with a text that says 'GLORY') on you?
I did it because I liked it. I don't care what people say about me, I will continue to do things my own way. The cross and the flower signifies that Jesus Christ died on the Cross of Calvary, the phrase 'Glory' means glory be to God for His good works.

Why did you choose this style of tattoo?
I chose it because I believe in God. I worship him everyday.

Do you show your love to God with a tattoo?
No. I just love the tattoo. I just believe that there is nothing wrong in announcing the glory of God with a tattoo on my body. I would have done a butterfly, but I don't believe in butterflies.
Why didn't you choose to write the name of your boyfriend on you body instead?
God comes before my boyfriend. God comes before anything in my life. So I should have His name first before I think of someone else.

Who would be the person?
Don't worry, when I do it, you will see the name on my body. (laugh).

Is it because you don't care that you flaunt your cleavage?
I wear what I love to wear. I wear what I feel comfortable with. If you don't like what I wear, go hit your head on the wall. (laugh)

What has been the most challenging movie you've ever done?
I played the role of a drug addict and it was a very tough role for me. I was playing the role of a person I had never come across. I didn't know how to scatter my hair and scratch my body like drug addicts do. And then, there is this Ibo film, I was there with Sam Loko, Dede.

How often do you get jobs?
People call me and they tell me that a job is waiting. I get jobs; I mean good jobs. For instance, I have to travel to Calabar this Thursday for one of the jobs.

What did you study in the University?
Mass Communication

Where did you grow up?
I grew up in Enugu

When did you come to Lagos?
Over two years now.

What has been your most embarrassing moment with a fan?
I don't have any. I just try to be good with them.

Could you say you are sexy?
Yeah, I think so

What makes you think so?
I think so because I know I'm beautiful. Sexiness does not have to do with the complexion; it has to do with the air around you.

What would you consider the sexiest part of your body?
See for yourself.

Do you like your outlook?
Yeah, I love it because it has opened doors for me. Though I look a little bit older than my age, but I like my stature. It makes people to see me like a Madam, and I thank God for this gift.

What does your boyfriend do?
(laugh) I don't want to talk about it.

What would make you go behind the closed door with a man?
If I like him.

Can you go to bed with a man for money?
No, even if I like him. I don't think anybody should go to bed with a man because of money, especially actresses. They are strong people, for crying out loud sake. Acting is a good profession and not a job that helps you become a prolific 'waka-pass'