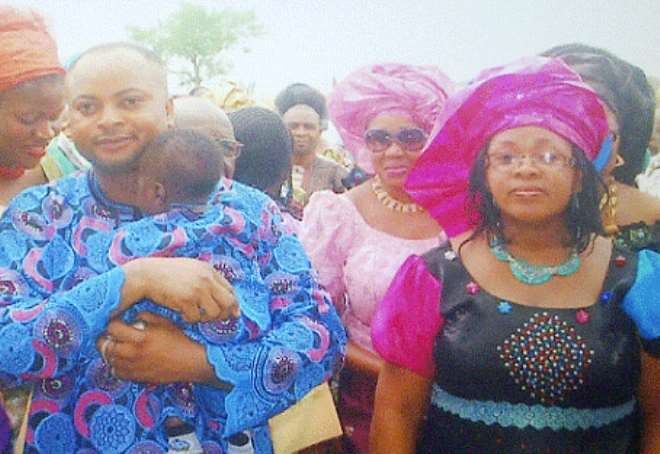 When Mrs. Prisca Ashiegbu got pregnant after seven years of fervent prayers to God for the fruit of the womb, she never imagined that she would have to wait another two years to hold her baby in her arms.

The nine years of childless marriage to her husband, Henry, was a rough but the agaony was forgotten when she was delivered of her “miracle baby” on February 2, 2013.

Married in January 2004, the couple who hail from Abazu village in Imo State was not so anxious about having a child in the first year of the marriage.However, they stated their journey of praying and waiting on God by the second year.

For many years, they went from one hospital to another searching for a solution to their childlessness and it was during one of such hospital visits that a scan revealed that Prisca had fibroid.

The doctors said the only solution was for Prisca to undergo surgery but the stories the couple heard about having surgery to remove fibroid didn't encourage them to go on with the treatment.

“I have always had this phobia of going for surgery especially when it concerns fibroid. I have heard a lot of stories and the stories were not good. Many women had lost their lives in the process and we didn't know where to go and who to trust. Some other stories we heard were that if one does not conceive within three months after removing the fibroid, it will grow back. I didn't want my wife to go for the surgery because I had already made up my mind that I'll rather remain childless than lose my wife to the ailment,” Henry, the husband said.

He further stated that in the search for a solution, they spent a lot of money.“We went to several hospitals and they all said the same thing. We were thinking of the best option that will help reduce the size of the fibroid and hope that pregnancy will occur. We went to a hospital in Abuja and were told that the fibroid could not even be operated upon at the level it was. My wife had to take injection that cost N35,000 each for a period of three months to reduce the size of the fibroid,” Henry added, stressing that when this too failed, they resorted to traditional medicine and were referred to a woman in Gwagwalada, who treated his wife following which she conceived.

He however said the joy of the pregnancy was cut short when several scans did not reveal the presence of a baby growing in his wife.

“There were physical changes to suggest that she was pregnant but everywhere we went to, they kept telling us what they could see was the fibroid and not a baby but the case was different for the traditional medicine practitioners who confirmed that she was indeed pregnant. The baby, according to the woman, who treated my wife was growing alongside the fibroid. The woman continued her treatment trying to reduce the size of the fibroid so that the baby will mature because the fibroid was delaying the growth of the foetus and when it was nine months, Prisca who is a teacher by profession applied for a maternity leave.

The couple was in a dilemma. They could not go for surgery as the doctors had not confirmed that the woman was pregnant while those who had confirmed the pregnancy did not have the requisite knowledge and equipment to operate on her. They resorted to prayers, hoping that a miracle should happen.

Prisca's sister, Mrs. Justina Amadi, told them of a woman in Aba who could help them and when they got there, the woman who also works in a clinic examined her and told her that she felt the baby but when Prisca went for a scan in the same clinic, the baby was not seen.

From Aba, Henry, a staff of the Embassy of Iran, said they headed for Port Harcourt, where they had been told about a woman who was pregnant for one year and nine months and found her solution.

“Early December 2012, we went to Owerri. It was a woman who was a friend to my wife's sister who directed us to Port Harcourt. She told us that if she had delivered after a year and nine months pregnancy, my wife should have faith that she too will deliver. She directed us to the person who helped her when everyone had given up,” Henry said, adding that after some initial challenges, they were able to locate the traditional medicine practitioner, who examined his wife and confirmed that there was a baby and the baby was still alive.

“She said because the fibroid was sharing space with the baby, the baby wasn't mature so she will have to place me on treatment for one month and give me medicine that will make the fibroid shrink and give the baby space to grow. This was happening in December, 2012. We started the treatment and we saw progress,” Prisca narrated, adding that after one month, the woman told her she could come for delivery as the baby would have been mature by then.

We went there on a Monday and on Tuesday, I continued with the exercise. I started dancing all kinds of dance steps including those I danced as a child. Everyone was calling, they were worried. She later gave me another drug and after I took it, I started purging. Around 12.30pm, she told me that it was time. I didn't even feel any labour pains and within a period of 15 minutes,the baby was born. My sister was crying. It was really a miracle,” she said.

The birth of Emmanuel Ebubechukwu, that is the baby's name, brought joy to his parents. They have taken their experience as a way God wanted to use them to help and encourage other people in similar situations