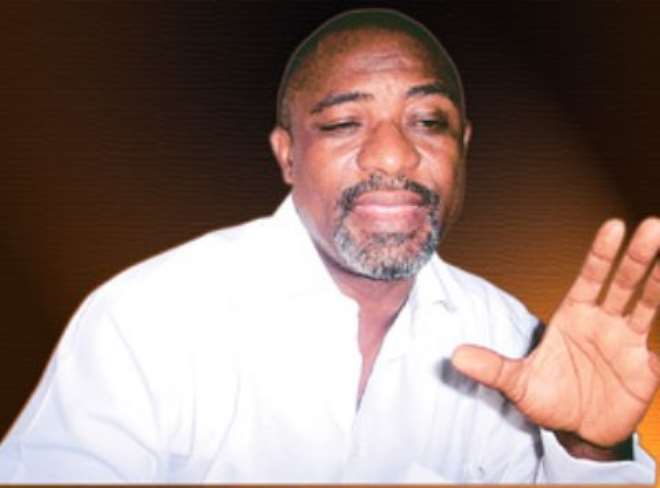 In the days of Checkmate, a popular soap back in the early 90s, Bimbo Manuel, who played Nduka, was a famous actor.
When Nollywood came on board, Bimbo, naturally, became a part of the industry and has remained there ever since.

But Bimbo is not really a known face like most of his contemporaries, and even those who came after him. Why is that so?

He said, “It is by choice. I am one of those who feel that visibility in the press should be issue-driven, and not just because I want people to remember me; not just because I want somebody to fund my project. I'd rather be in the news for issues, for projects, for things that are happening instead of somebody just writing about me: 'Bimbo just came back from the US, we saw him at the airport and he was carrying a brown bag.' That may be reducing it a bit, but that is the kind of things we read about.

“Of course, there are a couple of other reasons – not any less important. But basiclly, the above is the main reason. I have children and they are very intelligent. They pick up newspapers and read. They read everything we read in the house. It won't be nice if my children pick up the newspapers to read and find out that their father has said nonsense. I have spoken to the press a couple of times and I have been misquoted. Some of the things that I said have been taken out of context.”

Bimbo said not being in the news did not really affect his career. Even if he does not get to be seen in front of the camera, his job as a director puts food on the table for him. He actually would tell you that he is first and foremost a director.

“It does not affect what I do. If you look at it superficially, it will be difficult to come out with any other reason. But you see, I went to a theatre school. I majored in directing. Before that time, I have worked on television. I worked on radio as an announcer/presenter. When we went to school, it was first choice for me to work behind the set. But when we finished, employment opportunities were very few. We were, however, taught to be versatile. If you are a director, you are expected to be a good actor as well; you are expected to know everything about movie production.

“When we came out of school, quite a few of us ended up in front of the camera. That was how it appeared to a lot of people that we were primarily actors. But if we are to define my career, I am, first and foremost, a technical person; I work behind the camera. That is basically what I do. I also do quite a bit of documentary. I package concerts too. It gives me an opportunity to make choices about when I act and what I act in. it is not every script that comes that I am compelled to jump at. Fortunately for me, it is not the only place that my livelihood comes from now.”

Bimbo comes across as a difficult person to work with, he even said many people told him that to his face. But he explained that he was just being principled.

“When you get a script, it seems to be an unspoken rule now for you not to ask questions about who you are playing with or against. You are not even supposed to ask who is directing and all that. I have heard it said to my face that I am a difficult person to work with. That may be true, because I will insist on those basics. I will not wear an oversized shirt. I will not hold up my pair of pants with a belt. We are compelled sometimes to do that so that the show could go on. I don't think the show must go on at all cost. It is my face that is out there. I have to look the part I am playing. If my make-up is wrong, nobody is going to ask who did my make-up. They will simply tell me my make-up was bad.”

And because he insists on these basic things, Bimbo said many people do not like him; but he has no apologies for that.

One controversy that has been in the movie industry is that of ethnic barrier. Some people have alleged that the Igbo people dominate the industry and they do not give others a chance. Bimbo alleges that as well.

He said, “The industry is ethnic nationality-driven now. People are beginning to find the ethnic orientation and align it along business lines. It is not because we have a dearth of good Yoruba, Hausa or any other ethnic personality who could speak good enough English to play in Nollywood. If you want to be fair, you could name five or six other people who could have done better than the person they finally chose for the job.”

Could it be that Bimbo doesn't get many roles because he is not good enough?

To that, he said, “Haba! You have come again! Let me tell you, I am not missing scripts. That is a fact. I am not speaking in arrogance: I choose my own scripts. Sometimes I take some of those scripts based on sentiments, maybe because the producer is my friend.

Whether he gets roles or not, one thing that cannot be taken away form Bimbo is the fact that he has been in the industry since its inception. As such Spectacles asked him to rate the movie industry.

“If you estimate what we have achieved so far from the days of Living in Bondage, I think the industry does deserve a pat on the back. But you see, we need to call ourselves together and think. What we have now is horizontal growth. We have more actors, more directors, more producers and more stars. But outside people like Genevieve who got good management and was able to break in on the international scene, apart from people like Joke Silva who trained in England and Bukky Ajayi, there are hardly three other names of which you could say, this is really world class. I do not think it is because we don't have the potential, I think we have an abundance of it; but I think we are too content with mediocrity and that is where the worry is.”

Regarding how the industry can be improved upon, Bimbo said, “We can get into collaborative effort. I believe that money will come, I am definitely convinced about that. But we have to do the right thing. There are all kinds of efforts going on, but nobody is talking very seriously about developing the talents of the Nigerian movie makers. It is very sad. We have a bad attitude that has limited us. I was pleasantly surprised when I went on the (Inter) net and I saw that Stephanie Okereke was doing a film course in LA. I was in the United States then and I called her. Because of this, I hold her in high esteem now. That is what I think the younger people should be doing. That is what I think the older people should be encouraging the younger ones to do, and not to sell ten thousand movies and imagine that you did a blockbuster.”

Spectacles asked Bimbo how he got into acting.

But the difference between a scientist and an actor is much, Spectacles observed.

“Yes. But I just don't know how it happened,” he said.

No matter what, Bimbo does not regret not pursuing his dream of becoming a scientist.