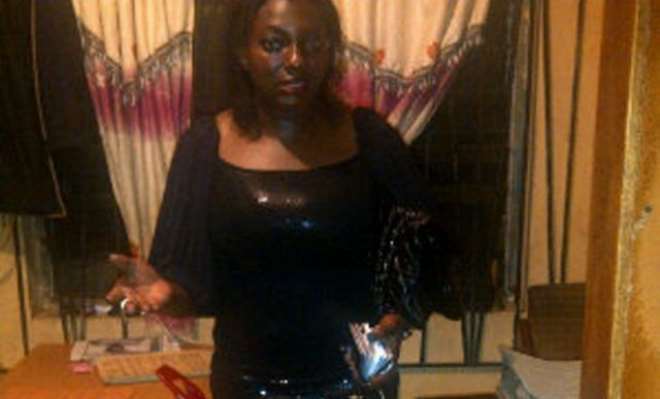 Dorothy Njamanze, one of the Nollywood actresses was assaulted by the Nigerian Army Force a couple of days ago, she was seriously brutalised that she is still in the hospital responding to treatment at Abuja Hospital.

The beautiful activist, who has been fighting against all kinds of violence against woman recounted her strange ordeal in the hands 'khaki boys'...

“On my way from the ambassador for peace beauty pageant held at the Sheraton Hotels, I decided to check on my brother at the end of my street. I parked my car in front of Dreams Garden at the end of my street behind one bus, and was going in to see Ugo (my brother) when a man dressed in a man-o-war uniform appeared from nowhere and shoved me on my breasts, commanding that I get into the bus I parked behind.

I reprimanded him for touching my breasts but instead of apologizing, he continued to pushing me by my breasts towards the bus, so when I couldn't bear it anymore I pushed him too and started running away.

Three men wearing man-o-war uniform and a head warmer, no name tags, and two plain clothes policemen ran after me. When they caught me they descended on me, beating me mercilessly despite the fact that I was screaming who I was.

A girl who was waiting for me in my car, after waiting for a while and didn't see me, came down to go and look for me at my brother's place. She was horrified to see all those uniformed men assaulting me and trying to force me into the bus.

She started pleading with them, telling them who I am and even showing them my car keys, but all to no avail. She started screaming when she thought they were going to kill me and that attracted people's attention.

When crowd gathered and people started recognizing me, they started coming to my rescue and there was almost a mob attack. A soldier out of fear cocked his gun and said he'll shoot me if I don't enter the bus.

What hurts most is that I've been fighting against violence against women, and now I'm a first victim of it. I have over 70 cases of abused women on Abuja streets. “The team that assaulted me tried to escape. I chased them down to area 10.

Ugo found me there and another soldier cocked a gun, pointed at his tummy and threatened to shoot. A female soldier cocked her gun and pointed at Justina, the girl in my car, who was supposed to be on my show (ability talk, earlier in the day on love 104.5fm). Apparently the female soldier wanted to shoot Justina for having piercings on her face, because she said Justina was not a true Nigerian by that," She said

She further stated that "women have been randomly abducted and forced to confess to prostitution by AEPB in conjunction with the questionable NGO, Society Against Prostitution and Child Labour.

I have over 70 cases against them and now I'm a victim. Women are not safe in Abuja.

The Military should be put to better use. It's high time they pay for the damages they have been causing. I am so traumatized. Having cocked guns pointed at us is a mental image that tortures me.

Government needs to hear us out, get facts and figures and stop the abuse against women. I wish the national assembly will permit me make a full presentation on the degree of this violence against women in Abuja and act immediately on it.

I have rape victims, bullet injury victims, people beaten out of their jeeps at gunpoint whose names were published as prostitutes in national dailies, abused youth coppers… all sorts of traumatized victims. These people need rehabilitation at difference levels urgently.

Well, we hope the government is reading because the worst kinds of violence are those against women and children," she concluded.