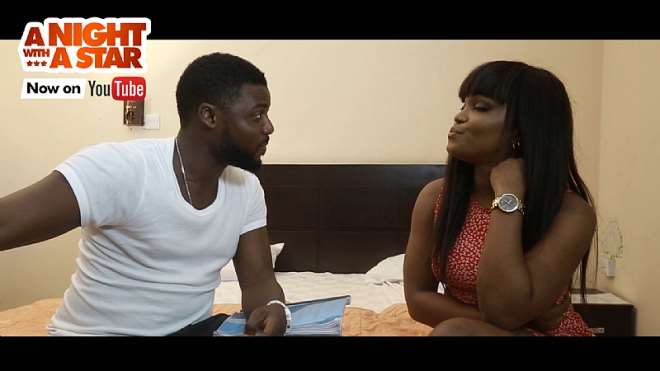 After many years of managing online content for top movie producers, Behind Nollywood Pictures has produced its first ever complete and controversial film, A Night With A Star.

Starring Daniel Lloyd, Kay Samuel, Iheme Nancy, Jazzy Okey alongside others, the wave making and most viewed movie on youtube was shot half in Owerri, and completed in Lagos.

With an untouched and unrevealed storyline, it tells the story of what most celebrities do with fame, alongside what it takes them to remain relevant as one of the most regular faces on screen.

As written, directed and produced for Behind Nollywood Pictures, media personality, Ugochukwu Favour-Mayor stated that it's an art of research which aims not to hit on anyone, rather he said that the very aim of bringing it to limelight is to correct some ills happening in Nollywood.

However, the synopsis went further to expose how up and coming actresses lavish gift items on producers, even as they go far in sleeping with them. As if the story ends there, it also depicts how some made faces go about breaking protocols with their fame only to get into the beds of some society big shots.

Interestingly, it is suspense-filled and intriguing, as the story connects three female wannabes who ended up becoming celebrities but had a showdown with a popular and celebrated actress as acted by Kay Samuel.