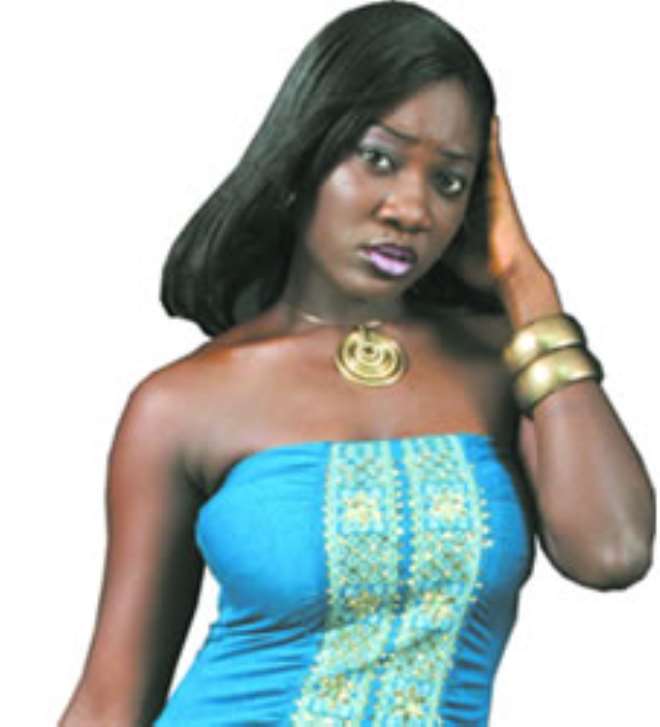 Ever since Mercy Johnson came into limelight about four years ago after staring in the movie 'The Maid', life, as they say it, has never been the same for her. The ordinary girl with a dream, as she likes to call herself, is now big; in fact beyond the shores of Nigeria. Just before she added yet another year to her age Thursday, Mercy spoke with SAMUEL OLATUNJI on her life and about the appellation - sexiest actress in Nollywood.

People refer to you as the sexiest actress in Nollywood. Do you actually think you are?
No! Every woman is sexy in her own way. I'll just say I'm okay.

What defines a sexy woman?
I think being sexy is not all about beauty. It's not about exposing yourself unnecessarily. Being sexy is a personal thing. It's what a particular person portrays in everything she does. Someone might have a sexy way of talking, or a sexy way of appealing to people. A woman appeals to people in different ways. Being sexy in itself is large. You can't quantify it.

How is it with you and negative report?
For sometime now, it's really been frustrating. I guess some people are really trying to frustrate me. But I think it's just a small price to pay for what I get. It's a little price to pay for everything I get as Mercy Johnson. The negative side is alarming and heart-breaking, but the positive side still carries much weight.

Is it also true that you cut your hair to further portray the much-talked-about sexy looks?
The movie I did for Desmond Elliot was the major reason I cut my hair. It was strictly for the movie.

People call you rave of the moment in the movie industry. How does it feel to carry that tag?
The industry is just too wide for competition. It is a place people come in and keep coming in and your footprint is still there. It's extremely large. You just can't have all the fans. You can be the hottest thing happening but you can't be everything to everybody. Everybody has his or her fans. I'll say I'm doing well, but not the rave of the moment.

How often do you go on location?
Every week. I'm on set every week. But I'm taking a break for now, so I can look fresh before I travel.
Where are you traveling to?
I'm going on tour of the whole of Europe to meet my fans.

Would you have still been fulfilled if you weren't an actress?
I think it takes more than luck to make the right choice. I believe in faith and redemption and I believe in myself. It's not about being an actress. I said earlier that if I wasn't an actress. I would have loved presenting. I think I still would have been fulfilled because fulfillment is just about doing the right thing well and getting to the apex of your assignment.

Are you in any relationship now?
Mmm… yes!

Between your relationship and your career, which comes first?
It will be my relationship.

So your relationship can cause you to stop being an actress?
There are certain stages you get to and you take some things more seriously. We're not in the western world. This is Africa, and this is an environment where you need to regard people more than accomplishment. And when I say relationship, I don't mean boyfriend and girlfriend relationship alone. It means that if I get married today, my marriage comes first. My relationship comes before my career. But right now it is your seriousness that gets you to that point. It's just like you're asking me which is going to be more important between my kids and my work; it's going to be my kids.

Is your boyfriend not complaining about media reports on you?
He complains once in a while because you people can actually split a home atimes. He complains and we quarrel once in a while about some write-up he reads. But, above all, he understands.

With your busy schedule, does that mean it's a good-bye to Lagos State University (LASU)?
No, I am not saying good-bye to LASU.
So, what's going to happen to LASU?
I'm still schooling, though it's not been easy at all.

But I learnt you deferred your study, how true?
Yes, but I'm going to resume fully next session.

I read recently that you had a carry-over or some problems with lecturers in school. What actually went wrong?
It's normal for a student to have problem in school, I don't know why people keep writing unnecessary things. I don't know why my own should be so obvious. Why can't they report good things that I do? It's only the bad things that happen that they get to say.

What does love mean to you?
Love is respect. Love is commitment. Love is being there when it matters most. Love is putting your loved ones first. It's sacred.

What does your boyfriend do?
He's not really a press person. He is abroad.

Why is everybody dating someone abroad, are we guys here not up to the task?
It's not about you selecting people, it's about the person that comes to you and flows with you. You can't go for what doesn't want you; you go for what wants you.

For how long have you been dating?
Almost three years now.

How does he feel when he hears about your stuffs that are supposed to be under wraps being discussed in public?
Sometimes he calls me and says guess where I am and I would say work. He'll then say people are talking about your hips. But most times we just laugh over it.

How often do you guys see?
We see very often. Whenever I travel, we see. Whenever he's around, we see. He's usually around; he's even around at the moment because of my birthday which is on the 28th of August.

How old will you be then?
Why would you want me to tell you that? So that in ten years, you people can say she's going to be sixty.

For how long have you been in Nollywood?
Let me say four to five years.

Who introduced you to Nollywood?
A very good friend of mine, his name is Oscar Ray.

Is acting all you want to do?
No, acting is not all I want to do. I have lots of things I want to do. I really love to do something that'll enable me give back to society that has given me the chance and has made me somebody. I was just a little girl with nothing but a dream. So, every time I see girls that are in my former condition, it really make me wants to reach out.

Have you ever had a nasty encounter with a fan?
One happened at a parking lot when I was traveling to Benin. I had gone to the car to pick up my things. While I was doing that, someone just bumped on me and was like, 'Oh! I like your films, and can I get a hug'. And then I consented. But to my utmost amazement the guy kissed me.

I wish I was in the guy's shoes (general laughter). So what happened after the kiss?
Well, I was extremely surprised and just had to let go.

What can you say about the rumour of you and Rukky Sanda fighting over D'banj?
I don't really know what to say about that. I've never met D'banj before and don't even know what he looks like. And I don't know Rukky.

Your boyfriend is in Spain and you're in Nigeria. What do you do those times you need that irresistible romantic touch?
We speak a lot on phone and we're extremely close despite the distance.
Can telephone conversations substitute for the real thing?
Yeah! Closeness in any form, as long as you talk all the time. Communication makes you feel closer.

What happens to sexual temptation?
(Laughs). What's the meaning of that? Common, Fimi sile jo (please leave me alone).

What do you do when you're tempted?
I'm never tempted at all.

Even a saint like me gets tempted sometimes.
You never told me you're a saint, Samuel.

What was it like the first time you were in bed with a man?
No comment (laughs)!