Affairs for Movie Roles, Both Parties Should be Blamed……..Actor, Tope Tedela 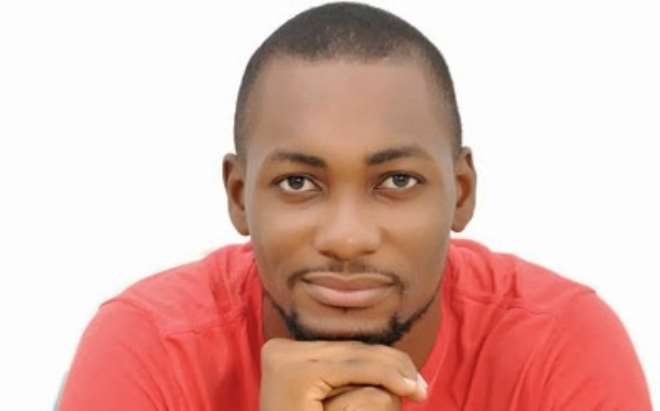 Nollywood actor, Temitope Christopher Tedela, who recently won the Entertainment Express Award for Fast rising actor in the Nollywood industry, in this interview with Nollywoodgists.com explains his reasons for still staying single and what his aspirations are as an actor. The graduate of Mass Communication from University of Lagos, was one of the winners at this year's 2014 Africa Magic Viewers Choice Awards, AMVCA, for Best Actor in a Drama.

Who is Temitope Christopher Tedela?

There is nothing spectacular about my background. Am the first child of the family of four children and I grew up in Surulere part of Lagos. I was a bit stubborn while growing up but today my people are cool with me and I love life and I am an easy going fellow. Also, I have had my own fair share of life and I have been able to survive and I think life should be taken easy and we need to be helpful to other fellow human being.

The movie, “A Mile from Home” did you expect you were going to get an award for that movie?

I have answered this question in a lot of platforms. For me, shooting the film was very tough. So in that state of mind, we were not really thinking of any awards. All of us were relatively unkown. For Eric the producer and writer of the film, this was his first feature film. There wasn't anything in particular we were banking on. I wasn't thinking about any awards. It is also a bad thing when you win an award because the next movie you act, you will be asking if you will win another award. So while filming, I wasn't considering any awards. I just felt this is an opportunity for me to show what I have and be truthful to the character I wanted tp prtray and that was just the focus for me.

Reports did have it that you were not paid for that particular movie, were you doing a philanthropic job?

You know it wasn't a philanthropic movie. It was a very low budget film but it has a lot to do with young people and you have a good story and you have a couple of people who are willing to work the work and not just talk. So as at that time, even if there was no money, a lot of us took on the job and we were glad we did.

You were very busy schooling and doing other jobs, so when did you start acting?

You see if you were meant to be doing something, there will always be something unsettled about your life. I have worked in so many corporate organizations and it's not that it is a bad thing, you know when your body is itching you that you were actually meant to be here that is why I couldn't really stay in the corporate line. But somehow, I still find myself doing something along these areas. But for acting, I have always loved it. You know when I was much younger, I never thought it was a thing anybody would allow me do or take up as a profession but as I grew older, I realized this was actually what I wanted to do and that was just it.

So far, which of your movie would you say you really gave in your best?

Talking about best, under any circumstances you find yourself as a performer, you just want to try and put in your very best and you can. Any time I get my script, I always write on the script 'believe,' because you just need to believe that character you are playing. You just need to sink into it. But, 'A mile from Home,' was quite challenging but I enjoyed it. I did somethings I never did before but it was good. I did a film with Jimi Odumosu called, “In my father's House,” where I had to put up an English Jamaican accent and I wonder how that is going to come out, but that was quite challenging. You know there is a certain level of fear when you are out of your comfort zone, so in that movie, I was actually out of my comfort zone. So I am expecting to see how the movie will turn out. So those two were very challenging for me.

People say Nollywood is still growing; now you have been there for a while, what is your assessment of the industry?

The industry is growing but we are not there yet so let's not kid ourselves. A lot of work still needs to be done in all the areas from acting, directing to cinematography. But we are making a movies and better films are coming out daily. Good stories, not that we never had stories, but the stories are being told better now. There is growth in the industry. It might not be as much because there is a lot of quantity and the difference between the quantity and quality is quite far apart. But there is still good films being made.

What's your take on unclad scenes in Nollywood which has eaten deep into the industry?

Let me ask you a question, do you take your bath with your cloths on? A married couple, do they make love with their cloths on? Largely no. You know we say acting mirrors reality, film is an extension of real life and so on. I will say the story is the most important factor we should focus on. If the unclad scenes will not add anything to the story, then we can do without it. Again, I understand where we are coming from. We are Africans but in real life, these things are there and they actually happen. But in the end, it should be done with taste. It doesn't mean I am going to act unclad, I am just saying even if we are going to do it, it should be done with taste.

How do you cope with fame and fans?

Well, I think if you are going to build a house, you need to count the cost. When I was in the university, apart from acting, I was a bit popular and I have just come to realize that there is really nothing there. Am just human like every other person. The work that I do just puts me out in people's faces. If I were a doctor, I will just go to my office and come back and just people in my circle would know me. Everybody in a particular area has a certain level of popularity. In our classroom, office and other places but I think the key word is responsibility. So anybody could be famous or notorious as the case may be and get photographed and before you it, you are the overnight sensation or celebrity. So it's just responsibility and we just need to be grateful that we are able to do what we know how to do best.

Celebrities and their fake life styles who should be blamed?

This is a very tough question because there are lots of angle to look at it. The media has a very big role to play because a lot of times, they extol a lot of things that yes, I think we are use to it but it's just unfair. We live in a vain world that's the bottom line and the media also help to push out this vanity and try to set agenda even the more. Like who wore this cloth better, how many cars are in his garage, did he match his colours
well, he wore this outfit to that event and he is wearing it to this event again

(interrupts?) But sometimes, you do not need to blame the media for that because you put it up on your social page?

No, this issue has been going on even before the social media became very potent. It's been on and on so let's not blame social media. Maybe a 70 year old man who does not have interest in the social media, the media will always dig up something like this guy is now broke, this guy is this and that. So, I think the media has a lot of roles to play.

On the other hand, it is the responsibility of the individual to really know who he is and what he/she stands for. People will talk, say a lot of things, in fact will even tell me that I can't act. So you just need to be strong and say this is what I want to do because people will talk and the spotlight is going to be on me, so you just have to be determined.

If you were given the opportunity to change something in Nollywood, what would that be?

You have been enjoying bachelorhood coupled with fame, should we be expecting wedding bells soon?

(Laughs) wedding is a good thing. My parents celebrated their Golden anniversary some months ago and I actually admired how far they have come but they today, you hear about people getting married and within the space of six to seven months or a year, they break up. Also you hear some success stories too but I just think if you want to tie the knot, you just need to understand what you want out of it knowing that you will be going in for the rest of your life. So. I am still considering because you need to ask yourself this question, is this thing compulsory? So when that time comes, you guys will know about it.

But currently you are enjoying your relationship?

(Laughs) Currently I am having a working relationship with you. I am in love with my script, my job and I am just trying to see when that marriage will happen if it will happen.

Affairs for roles in Nollywood, who should be blamed?

The truth is that this question is not as easy as it sounds when it is asked. I am against any form of sexual harassment. I feel if you want to have anything to do with anybody, it should be mutual. It shouldn't be because you want to get something from the other person. But I have had the opportunity to talk to certain people on different scenarios. Sometimes these ladies that say directors want to have an affair with them are the ones that offer themselves to the directors. On the other hand, we have some irresponsible directors who hit on the ladies and begin to give them conditions to be able to get a movie role. There is also the desperation of those ladies that really accept these offers because they just want to be famous. So there is no one way to look at it. It's a deep issue.

Do you have plans of venturing into movie production later?

Definitely I have plans. I will go back to study film directing, producing, cinematography and all the necessary aspect of movie i need to know about. But I just feel you need to conquer your demons one after the other. Right now, I am trying to focus on my acting to be able to attain a certain level of proficiency.

Chioma Chukwu-Akpotha, John Dumelo In The Past Came Calling**Premieres June 15