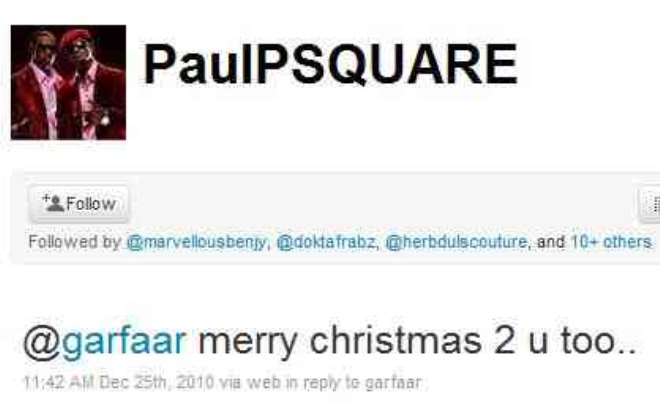 As more Nigerian celebrities join the popular social networking site Twitter to increase their fan base, impersonators are also having a field day deceiving fans and followers by posing as their favourite artistes.

Just this morning, one of the P Square twins, Peter (@PeterPsquare) had to tell off someone impersonating his brother Paul (@PaulPSQUARE).

Apparently, the unknown impersonator was aware that Paul has got no twitter handle; so he decided to open one on his behalf upload the picture thereby generating 2,281 followers, following just 7 people and posting the link 'http://Mypsquare.com' to P-square's official website.

The alleged impersonator's last tweet was: '@garfaar merry christmas 2 u too' on Saturday, December 25, 2010 and is surprisingly being followed by some other Nigerian celebrities such as Dokta Frabz and Marvelous Benji.

Unfortunately, this has become the second case of celebrity impersonation recorded in recent times. If you recall that sometime in November last year, a fan was also identified to have also impersonated eLDee on facebook, posting pictures of his family and regular updating his status similar to that of the trybe records boss.

All this has got us thinking, isn't it high time Nigerian Celebs got their accounts verified? 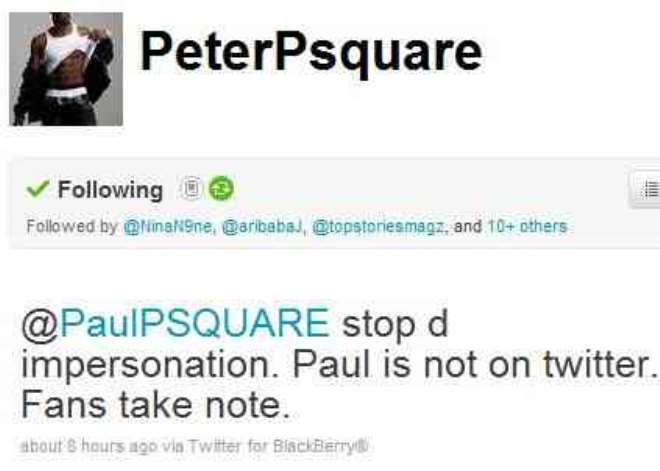