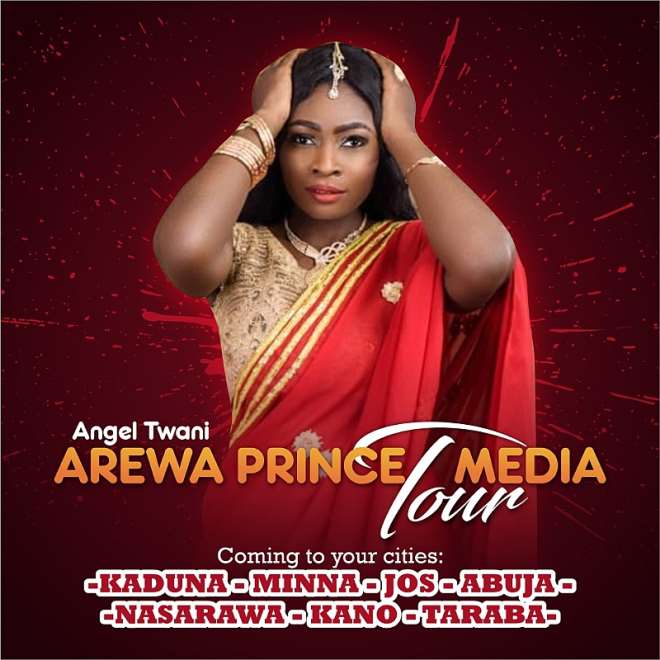 One of Nigeria's famous, most prospective and young female Abuja based RnB/Afro musical Artist "Angel Twani" is set to commence a national Tour across states in northern Nigeria tagged "Arewa Prince Media Tour". She would be commencing the regional tour with a view to promote her recently released Single titled "Arewa Prince" and featuring one of Africa's celebrated Rapper "Magnito".

Speaking with journalists in Abuja today, Angel Twani described her tour across cities in northern states including, Niger, Kaduna, Abuja, Jos, Nasarawa, Kano and Taraba state etc as a huge step, especially in trying to create an impact in ensuring that the northern part of Nigeria is recognized and spotlighted in the entertainment map.

According to reports, the Arewa Prince is a track which will be droping-off in her fourth coming EP whose title is yet to be announced but insinuations are that the it will be officially unveiled and released before the 1st quarter of the year. Angel Twani is an Afro-pop singer, songwriter/ entrepreneur and brain behind famous hit track "I Stand For Peace".

Her career in the entertainment industry has remained on a fast track towards attaining success and several prospective engagements. With the new drop of "Arewa Prince" and commencement of her regional tour, her influence and fame may experience an impact-blast especially as it concerns promoting entertainment in the northern region of Nigeria.

According to executives and organisers of Angel Twani, Arewa Prince Media Tour, they noted that her recent track with rapper magnito, "Arewa Prince" will be officially available on all the online download platforms for her fans and anyone who loves good music to access. During her Tour, she will be engaging in several endorsement deals, performances and courtesy visits to create visibility and awareness for her recently dropped single.