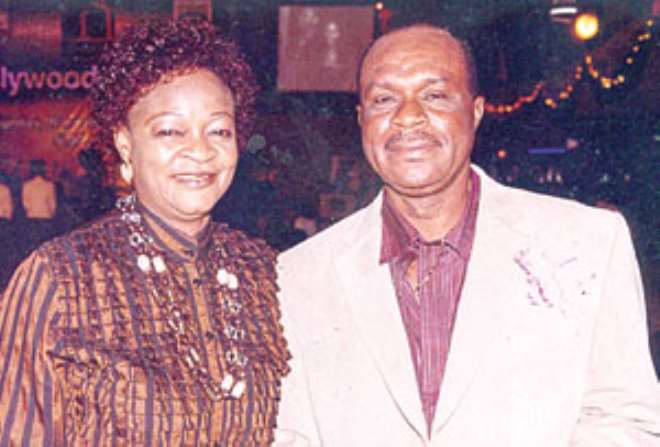 Ashley Nwosu died last Wednesday after he fell into coma at the Military Hospital, Yaba, where he was being treated for severe liver problems. Showtime Celebrity visited the Victoria Island, Lagos home of the veteran actor during the week, where his Rivers State born wife, Grace Iberie Nwosu in her grief narrates the story of her last days with Ashley.

Madam, we commiserate with your family over the death of your husband. What actually happened to him?

He was sick for about two weeks and when his condition was getting out of hand, we rushed him to the Military hospital in Yaba. At the hospital, he was diagnosed with liver related problem which he tried to battle for two weeks before he later died.

Even though his doctors told us that we came to the hospital a bit late. Initially, he didn't know he had a liver problem though he noticed he was having indigestion.

That was what brought us to the hospital, and at the end of the third day of his admission, after the results of all the tests conducted on him were out, it was discovered that his liver had damaged badly.

At first, he was responding to treatment, but after a while, we went into coma and he didn't come out of it.
Are you saying he didn't notice the symptoms on time?

The symptom he noticed was indigestion; he was passing out the food that he consumed un-digested. When we noticed this development, we raised alarm as we rushed him to the hospital where he was given series of drugs to no avail.

How long have been married to him?

We have been married for twenty five years now. And we are blessed with our loving daughters. To God be the glory.

All these years you have lived with him, how would you describe Ashley?

He was a perfect husband, caring and loving ; He was everything to me, we never had any moment of disagreement that warranted us to bring a third party into our family.

Quite well, we had our disagreements as human beings, but it wasn't to the extend of inviting a third party to settle our scores. And while the disagreements lasted, he would call me about two hundred times per day to ask how I was faring, just to make up for the face-off. He was everything, a good husband and a good father to our children. I would miss him.

At the time, it was obvious that he was going to give up the ghost, how did you feel?

As God wants it. It's just that I held him in my arms that early morning when he gave up the ghost. Throughout the period of his illness, I was sleeping in the hospital with him. My daughter would come to the hospital in the morning to look after him, while I go to work. In the evening, I would return to take over from her.

At a point, when he became weak and unable to stand on his feet again, I would clean and feed him. Few days later, he went into coma and couldn't take in food any longer. It was a trial period for me. The Doctors at the Military hospital did all they could to save him, but it's just that it was too late.

How is life going to be without him around you?

As you rightly said, 'God gives and God takes.” If God has not willed it, he wouldn't have died. It's the will of God, and He alone, will chart our course. We are going to depend solely on Him. He said, “ He is the husband to the widow.”

He is now my husband, I believe that he would take of me and my children that he left behind. The vacuum that had been created by Ashley's death, God will fill it for us.

What was his last words to you?

Before he fell into coma, he told me how he was passing through a gate that was in front of him. I rebuked him, saying that there was no gate here. Then, he asked me to move his sickbed closer to the window, where he would be able to hear what they were telling him. At that point, I started praying for him.

That same day, our pastor came to pray for him, and he told the pastor that a beautiful room had been prepared for him. The pastor was agitated as he refused to tell me what he told him.

What are you going to miss about him?

A lot, he virtually run the home. He knows where everything is kept in the our house. He keeps the house clean because, while he lived he was a clean man. I'm a bit careless and I don't have time. That aspect , I'm going to really miss him, and also, the caring and love he showered on his children.

While he lived, and made his mark in Nollywood, were you at any time agitated whenever you watched his movies?

I don't really feel anything. I see him as my husband in real life, and on television, as an actor. I don't really believe he was the person acting the role, especially when he had to kiss on screen, and had romantic affairs with the opposite sex. I would tell him, this is not you, but somebody else, and we would laugh over it.

What attracted you to Ashley?

It was his strong will. He saw me at a time, he said he was looking for a wife. It was just miraculous, we had met briefly somewhere, and I had forgotten everything about him.

Co-occidentally, my friend's fiancé brought him to our house. He has an enviable sense of homour.
I first met him in 1984, we boarded the same taxi and he offered to pay for my fare. He gave the driver N5 and got a change of N3. Instead of keeping the change, he generously dashed me N1, and said , he would keep the rest.

I wondered how a man of his calibre would dash a lady N1. It was funny, but that was what attracted me to him. He had a caring attitude and he does not pretend. Then, he had not started making a career in acting, rather he was into modelling and shooting of TV commercials.